Named after the Grand Chief Membertou (1510-1611) the community of Membertou belongs to the greater tribal group of the Mi’kmaw Nation. Membertou is situated 3 kms from the heart of the city of Sydney, Nova Scotia, within its tribal district of Unama’ki (Cape Breton). It is one of five Mi’kmaw communities in Cape Breton, and one of thirteen in the Province of Nova Scotia. Membertou is an urban First Nation community consisting of over 1443 people, and one of 5 communities that make up the Cape Breton Regional Municipality, with a total population of over 115 thousand people.

Membertou was not always situated at its present location. Many years ago, Membertou (formally known as the Kings Road Reserve) was located just off of Kings Road, along the Sydney Harbor. In 1916, the Exchequer Court of Canada ordered the relocation of the 125 Mi’kmaq; the first time an aboriginal community had been legally forced through the courts to relocate in Canadian history. In 1926, the Membertou Community was officially moved to its present day location.

For more information on our community, please visit www.membertou.ca. 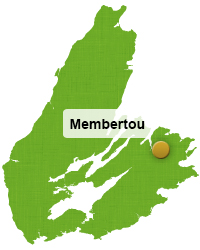